It’s summer time. The air smells like Coors Light and burnt hot dogs. You’ve been pumping iron and supplementing yourself to death after your New Year's resolution to stop looking like a Stay Puft Marshmallow Baby. That means it’s BEACH TIME. That’s all you can think about. You just want to go fist fight some waves, walk around on hot sand, and play volleyball with Val Kilmer to impress all the grandmas. But you forgot about one thing.

You’ll need lots of that. You don’t want the cancers. Plus there is one more thing to worry about.

Jellyfish line the ocean floor, so you will get stung. It’s best to have jars of pee handy to pour on your body when this happens. It can be someone else’s pee. It doesn’t matter. Cat pee works best, but good luck trying to get a cat to pee in a jar.

Once you’ve remembered all those things, remember one last thing.

SHARKS WILL BITE YOU.

I bet you forgot that, in all likelihood, you will be eaten by a shark if you go to the beach. It’s just fact. Statistics show that sharks kill over 1.5 million people per day in Maryland alone. Numbers don’t lie. Things are really bad out there, man. Have you seen the economy lately?

So how do you save yourself from inevitably being eaten alive by a shark in front of your children? Do what Richard Dreyfuss did in Jaws and grow a damn Scientist Beard.

In Jaws, ex-New York City cop Chief Brody leads an investigation into a series of shark attacks on the peaceful island of Amity, which is French for "Land of No Sharky Bitey." These attacks are happening right around the lucrative annual Independence Day celebration, so the Mayor will not agree to shut down the beach for the safety of his people. In Amity's darkest hour, humanity calls upon the help of three heroes -- Brody, Hooper, and Quint -- to rid their beach of this aquatic hellbeast. They are like the Avengers of shark hunters except not really at all. Don't call them that.

The Avengers of shark hunters start to come together when Brody calls up Matt Hooper, a marine biologist and shark enthusiast from the Oceanographic Institute. Matt Hooper is, of course, played by Richard Dreyfuss, who had the second beard to ever be featured on this site. Dreyfuss is also the first actor to be featured on this site twice. Equipped with his greying Scientist Beard, Hooper marches right into the local Medical Examiner's office, examines the remains of the first victim, and proceeds to tell the Medical Examiner just how full of shit he is about this "boating accident." Brody had his assumptions, and nobody wanted to believe him, but it took a Scientist Beard to flat-out exclaim "Yeah, dudes. This was a shark." The Scientist Beard provides the wearer with the power of rational thought, and Hooper uses it right out of the gate.

The power of the beard continues into the next scene when a group of vigilante fishermen come back on deck with a tiger shark -- what they believe to be the shark. And while everyone is ready to celebrate and take pictures with the shark, Hooper's beard poops on the party and says, "Well it could be it, but the bite radius isn't the same." Once again, the Scientist Beard does not allow the excitement of the moment to get in the way of rational thought. Hooper even tells Brody, "You're going to be the only rational man left on this island after I leave tomorrow."

Just like R.J. MacReady, Matt Hooper is faced with a dangerous situation that could cost the safety of others. So he does what any other dude with a Scientist Beard would do -- he uses the scientific method to confirm this "you got the wrong shark" theory:


Face it, if it weren't for Matt Hooper's Scientist Beard, nothing in this movie would have been accomplished. Everybody would have thought that mean old asshole of a shark had been killed, the mayor would have continued the celebration as planned, and everybody on the island of Amity would become shark poop in the Atlantic. To SCIENCE!

To help catch the rogue, territorial shark (whose name is not "Jaws," by the way. It's like calling Forrest Gump "Feet." Stop it.) Brody and Hooper team up with a crazy old coot named Quint. Everyone in town knows that Quint does this kinda shit for a living. The original bounty of $3,000 is chum(p) change to him. He needs ten large. Quint may not have a beard and he calls sharks "birds," but he does know what he's doing and he is one hell of an artist to boot. 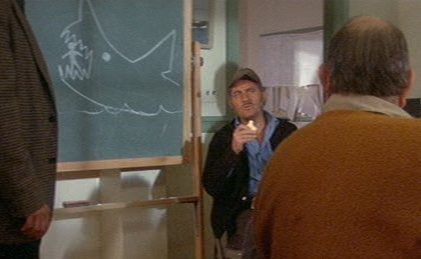 Now I'm about to spoil a 40-year old movie for you, but that's your fault if you don't know this already: Brody, Hooper, and Quint head out to the ocean on their ship, the Orca, to destroy this big, bad shark. Quint gets eaten to bits while Brody and Hooper swim to safety. Brody is our main character, so of course he's going to live. But why does Quint, a supreme shark-hunting survivalist, get eaten alive while Hooper and Brody swim off into the sunset? The short answer would be "Scientist Beard," but here's the long answer:

You see, sharks hate beards. It's tough as shit for sharks to get beard hair out of their teeth, so they don't even bother with them. You'll notice that not a single bearded person was eaten by a shark in this movie. Women and children are fucked from the get-go unless you're one of those weirder 10-year olds that enters 5th grade with a full-on beard. That kid's good to go.

Need proof that sharks don't attack people who have beards? Here, look at this science: 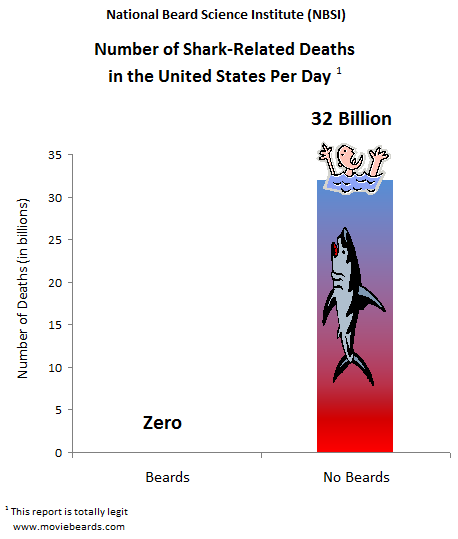 Now I'm sure you are asking: "Hooper was protected by his beard, but Brody didn't have a beard. Why did Quint die but Brody didn't?" Well I'll tell you, dummy. Great white sharks can sense blood from a mile away. However, beards create a force field with a radius of approximately 200 feet that directly interferes with a shark’s ability to sense its prey. I call it the Beard Bubble of Safety. When Hooper was attacked in the shark cage (and presumed dead), he simply stayed submerged under the boat, biding his time until this shitstorm of a day blew over. In doing so, he created a Beard Bubble of Safety that mostly protected the Orca.

So how are you going to survive this summer? You're gonna need a bigger beard.