Thor: How a Beard Made "The Avengers" Possible 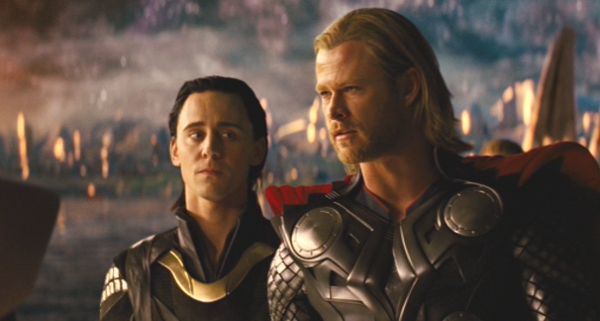 Thor is the god of loud atmospheric noises that scare puppy dogs. As the first-born son of Hannibal Lector and the true heir to the throne of Asgard, Thor is destined to become the new protector of the Nine Realms. He is entrusted with Mjolnir, a mighty hammer that possesses both destructive and constructive uses. For example, he can use it to smash Frost Giant faces, or he could build them a tree house. His choice.

Thor is an interesting superhero movie in that our hero, from whom the title is derived, spends 63.3% (38.5 minutes out of a 105 minute run-time) of the film without any super powers whatsoever. Instead, Thor dutch angles his way around boring old Earth as a mortal in a flannel shirt looking for a hammer for an hour of screen time. This was his punishment (and the audience's) for breaking the truce between the Frost Giants and the Asgardians. With the power of Mjolnir out of his reach, Thor must use his Superhero Beard to learn humility and fall in love with an astrophysicist named Jane Foster all in a matter of, what, a few hours? I've stood in line at the DMV longer than Thor and Jane knew each other.

The love story, as scant and laughable as it may be, was only possible because of Thor's beard. He doesn't have his hammer anymore. At least with that, he could impress Jane by making her a strawberry smoothie or something. And of course she won't believe that he's an ancient god from outer space that lives near a rainbow bridge. She'll most likely think he's a frat boy that plays too much Mario Kart. Instead, Thor relies on the Superhero Beard to make Jane fall in love with him, because that's the only way this movie knew how. It went like this:


Thor:   "I'm from outer space. I'm a god that lives in a city with a rainbow bridge. I have lost my powerful hammer, but I have a beard."

Thor's beard also gave him the power to sacrifice himself unto The Destroyer to spare the Warriors Three. This bearded sacrifice proved his worth of Mjorlin, which came flying back into his palm just in time for the movie to finally be over. So you see, Thor would not have regained Mjorlin had it not been for his beard. Without a beard, the Mighty Thor is simply Thor.

This brings us to our villain, Loki, the adopted brother of Thor who spends most of his time trying to prove his worth as a son. His villainous ways stem from jealousy. Loki isn't jealous of Thor; he's jealous of Thor's beard. Loki got the short end of Odin's stick. (Read those last words quick. It works better.) He's the DeVito to Thor's Schwarzenegger. While his brother, the Mighty Thor, sports the GQ Superhero Beard and gets the glory, Loki must live with the fact that he can't even grow a Villain Beard, let alone a weak Orlando Bloom goatee. Loki's face is follicularly challenged, if you will. If that weren't enough, Loki is also surrounded by the beards of Odin and Heimdall, as well as Volstagg the Valiant and Fandral the Dashing of the Warriors Three. For Loki, every day is a living reminder that he can't grow a beard.

Loki takes this anger back to Earth in The Avengers only to deal with more beards. Captain America was the product of a Scientist Beard, Nick Fury's got the chin pubes, and Tony Stark has the most pointy, bitchin' goatee this side of Ming the Merciless. Hell, even director Joss Whedon has a beard. And Bruce Banner would grow a beard, but he knows that a bearded Hulk would be too much for anyone to handle. Most of all, however, he must once again deal with Thor's beard. Even with the power of the Tesseract and an army of Chitauri, Loki still couldn't emerge victorious. There's just too much beard.

It's only fitting that the #1 movie in the universe was directed by a guy with a beard. Joss Whedon handled each character and action sequence like a true maestro. He is also the only writer/director in cinema to get the character of Bruce Banner/The Hulk right. But plot-wise, all of this was possible for one reason. Thank Joss Whedon all you want, but The Avengers happened because Thor has a beard. Think about it.
Posted by Mega Beardo at 6:13 PM