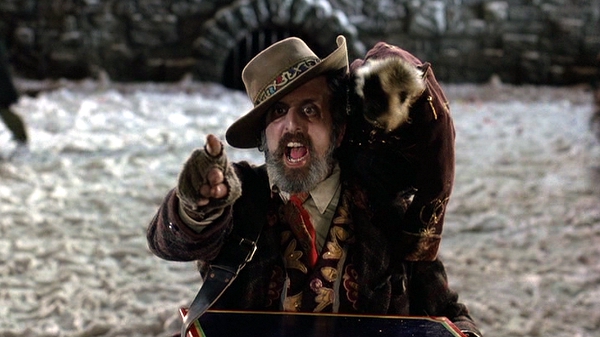 
To understand the purpose of Organ Grinder in Batman Returns, you may analogize him as such:

No, Organ Grinder is not the lead singer of Cannibal Corpse. He is Penguin's right-hand man who tends to handle the above-the-sewer dirty work. He is mostly silent, but he does get the chance to point and speak loudly near the beginning of the film.

And that's the thing with beards in Tim Burton's Batman films. Burton only allows one beard per film to have a speaking role; that role is always that of the main henchmen (Bob the Goon and Organ Grinder), which further proves the above analogy. The rest of the beards are reduced to extras or smoke-covered crimelords. Organ Grinder doesn't have much else to do in the film other than sit around in Penguin's sewer hangout and occasionally kidnap babies.

The main difference between the Organ Grinder and Bob the Goon is that ol' Grindy doesn't get shot dead by his own boss. He just gets arrested after Batman beats the monkey piss out of him. In addition, Organ Grinder was immortalized as an actual boss in the Batman Returns beat 'em up game on Super Nintendo. Check him out in all his 16-bit glory at around the 4:00 mark: