Victims of The Box: "Batman Forever" 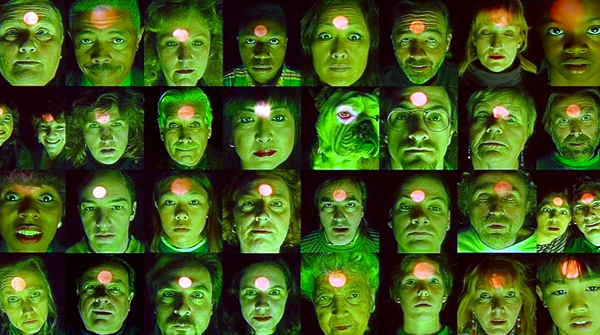 In yesterday's post, we learned the unfortunate circumstances of Bruce Wayne's decision to terminate Edward Nygma's brain manipulation invention The Box (not to be confused with that crappy movie with the same name). Nygma was obsessed with Wayne and hoped that The Box would become the next technological breakthrough for Wayne Enterprises. Bruce Wayne believed that Nygma's invention was too intrusive to the human mind and that it raised too many ethical questions. Nintendo's Virtual Boy console failed for the same reason.[citation needed]

As a result, Nygma villain-izes himself as The Riddler and use his brand new NygmaTech brainwave manipulator to suck the intelligence out of every brain in Gotham City.

From this sequence, we learn the answer to the age-old question: Why didn't The Riddler have a beard?

In this screen cap, there are 34 victims, 5 of which exhibit a variety of beard upon their chin. If we were to extrapolate this ratio to the overall affected population of Gotham, only 14.7% of the pilfered brainwaves come from the minds of the bearded. With this ratio, we now know why The Riddler never has the psychological need to grow a beard. It's just science, folks. Unfuckwithable science.